What green building techniques and design options make sense? Which ones save you, the homeowner, a few greenbacks in the long-term? Here I’ll share my experience with energy efficiency choices while building a two-story, 40 ft. by 20 ft. home addition. But before I jump into the details, I’d like to tell you I opted to be the “Homeowner General Contractor” (Homeowner GC) for our addition project. Let me explain.

I have more than a few years of project management experience as well as an extensive environmental consulting background. I’m a registered professional geologist, entrepreneur, and the former publisher/editor for environmental magazines. For the record, I know a little bit more than your average homeowner about the environment and what “green” really means. So what do you do when it comes time to consider green building techniques and make purchasing decisions for a construction project?

For starters, I did my homework and extensively researched building methods and the science behind numerous green-building recommendations. Once I understood how certain things worked (or didn’t work), it was a lot easier to evaluate not only the building design choices but also the sub-contractors bidding on the tasks at hand. One more thing, before making the final decisions I loaded up the spreadsheet and ran the numbers. I wanted to know the potential return for the green investment (ROI). After all, green is the color of money as well.

Below I’ll explain a few green building techniques I went with for our addition project based on my findings. And in addition to that, why the investment was made to upgrade beyond local building code requirements, in certain cases. 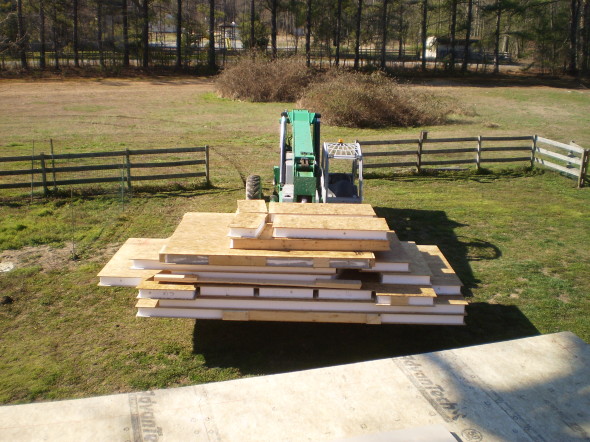 Structural Insulated Panels (SIPs) – Walls only (not the floors or the roof): Structural Insulated Panels (SIPs) were chosen for the walls. I went with 6 1/2 inch SIP walls with an R-Value of 24. In our area (Central Virginia), this exceeds code requirements. One important thing to note: SIPS “perform” at a much higher R-Value than a stick-built wall. For example, a 4 1/2 inch stick-built wall with R-13 insulation likely only gets you around R-9 performance. SIPS perform a lot better. You can either spend a little more for a SIP wall upfront (with respect to material costs) or pay more in energy bills month after month, after month… Several builders and General Contractors I interviewed told me SIPS cost too much compared to stick-built walls; they really don’t when all aspects of the project are considered. Below are a few reasons why.

Significantly less labor is required to put up a SIP wall compared to a stick-built wall. The SIP walls were installed in three days. A comparable stick-build 6 1/2 inch wall finished with insulation and electrical chases cut in would have taken about three weeks; according to the local builders/General Contractors that I interviewed for the job. With SIPS you generate less waste at the construction site which means less labor moving trash around and less waste disposal fees. You also save on labor when it comes time to run the electrical wires; chases are cut into the SIPS at the factory and it takes less time to rough-in the electrical. Another benefit is the fact that you need one less sub-contractor involved in the project given you don’t need to wait for the walls to be insulated once they are put up (they come insulated). I could go on but I won’t. Once you truly understand all of the construction costs involved with the walls, the numbers tell the story. SIPS are worth the investment and the ROI is hands-down better than a stick-built wall based on the true cost of construction. I have more information about SIPs here for those interested.

When designing the roof trusses, I increased the “heal height” (where the roof meets the top wall plate) by a foot. Why? The extra foot of space on top of the wall plate (basically, in the attic) allows more attic insulation where you need it; at the pinch point where the roof meets the walls. According to several energy efficiency studies I came across while researching, homes lose a lot of energy where the insulation basically goes to zero thickness where the roof line meets the walls. This made sense to me so I had the truss engineers add the extra heal height. It didn’t add much to the costs of the roof trusses.

Rainscreen – Underneath the Siding

To lower the risk of wall rot, it makes sense to provide a ventilated air gap between your siding and your sheathing. I went with an advanced building technique for the siding known as a rainscreen. SIP manufacturers, as well as many experienced siding professionals, recommend “rainscreens” for the exterior walls under the siding. Rainscreens using furring stripes are also recommended if you are using spray-foam insulation on your walls. It is smart building science and I believe it might be code a decade from now – already is in some jurisdictions. Basically, a rainscreen allows the wall to dry out much more efficiently. Even with Tyvek house wrap

(which we also used), the walls under your siding will get wet and you want them to dry. Rainscreens allow that to happen.

Rainscreens do add additional costs to the siding budget; both in material and labor. In our case, I removed the old pine-board siding from our existing home since we wanted consistent siding for the entire home. We ripped the 3/4 inch pine-board siding and used it for furring strips for the rainscreen. This reduced our material cost of construction but added more labor costs. On the other hand, the rainscreen lowers your long-term maintenance costs (less frequent painting, siding replacement, etc.) and extends the life of your walls.

Our rainscreen includes Cor-A-Vents to enhance performance. Cor-A-Vents allows the gap between the siding and the sheathing/Tyvek house wrap to vent and stops insects from getting behind the siding. The Cor-A-Vent added to the overall project cost as well. For more information pertaining to rain screens, read All About Rainscreens on the Green Building Advisor website. You can find a variety of house wrap options on Amazon here.

I purchased and installed a GeoSpring Hybrid Electric Water Heater

(GE GeoSpring 50-Gallon Hybrid-Electric Heat Pump Water Heater – ENERGY STAR) to lower our energy costs. This water heater is a significant upgrade from your standard water heater. Although it costs more than the typical water heaters, it pays you back year after year. It is one of the most efficient 50-gallon water heaters, using 62% less energy and saving $365 a year on utility bills (SOURCE: GE GeoSpring). What makes this water heater so energy-efficient are the compressor and evaporator that are incorporated into the unit to draw in ambient heat from surrounding air, using two variable-speed fans. When in heat-pump or hybrid mode (warmer months), the unit exhausts cool, dry air; it lowers humidity and cools the room while heating the water. Basically, the water heater is an air conditioner too.

I replaced our existing HVAC system which was 13-years old while building our addition. We needed a HVAC system for the addition and we needed a replacement for the old unit serving the rest of the house. During the design phase, I decided based on extensive research that the best thing to do was install the new HVAC system inside the building envelop. Therefore, we built a utility room, conditioned the room (it is heated & cooled), and subsequently located the new HVAC unit inside instead of in an unconditioned attic. Also, the majority of the ducts are now within conditioned space. Locating your HVAC system and ducts within conditioned space reduces your energy use, lowers maintenance costs, and extends the life of your HVAC system. It is a good investment if you think about it during the design phase of the construction project. It really doesn’t cost much more to do when it is considered early in the design process. 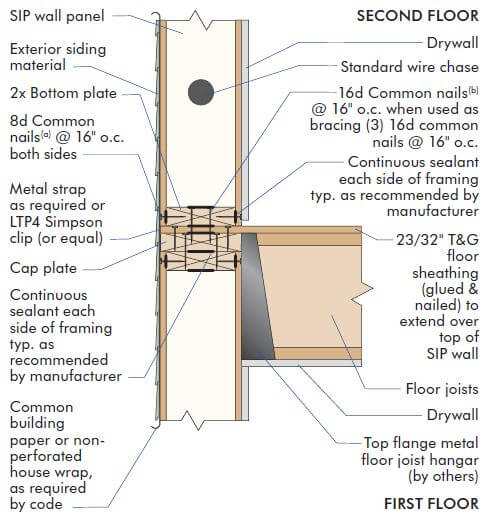 I found several articles that discussed the energy loss associated with second floor joists and the rim board that holds the joists. When joists are set on the wall plate the joists/rim extends to the outside of the wall. Insulating a rim is difficult to get right and it is a common area for energy loss according to energy audit results. A better way to build includes hanging the second floor joists “inside the building envelop” (joists don’t contact the outside at all – no need to try and fill every void at the end of the joists at the rim board). Hanging the joists inside is more energy efficient and results in a stronger building according to engineering data (search online, numerous articles support this conclusion). The figure to the right shows how we constructed our addition with hanging floor joists.

. I replaced the “builder grade” exterior dryer exhaust vent with one designed for energy efficiency; it seals when not in use. The old vent was basically a hole in the wall and the washer/dryer area in our laundry room was freezing cold during the winter. The new vent was inexpensive and easy to install. Basically, it lets warm air escape when open and prevents cold air (or hot air in the summer) from entering when closed. The dryer vent seal also prevents insects and rodents from entering your home. Any homeowner with basic DIY skills can install one and start saving money right away. I could not find one at Home Depot or Lowes so I purchased our dryer vent from Amazon

How did we do?

Our electric bill received the other day (January 2014) was LESS than our January 2013 electric bill even after adding about 1,600 sq. ft. of additional space to our home. I was amazed given it was a really cold January this year and we added our energy efficient water heater to the home before January 2013.

1 Comment on "Green Building Tips From a Homeowner GC"